There is a purity about the form and materials that reads back to another time where philosophy dictated aesthetic.

The striking thing about Emma Johnson‘s ceramics is the architectural quality of the angular forms. There is a purity about the form and materials that reads back to another time where philosophy dictated aesthetic. And this comes as no coincidence, Emma designs her ceramics with mid-century Brutalist architecture in mind. Brutalism often used modular motifs to build the mass of the building and used raw concrete for its honesty of material. Emma’s work is stackable to build a larger form and is built from porcelain and wood for the purity of the material. Though Brutalism has been often criticized as overbearing and depressing, a new way of looking at the architectural style has come to light in recent years where the aesthetic and philosophy has been celebrated.
Emma graduated from Brighton University in 2016 and has since opened her own studio. Her work has been showcased in collaborations with the Barbican Center in London as well as the Hayward Gallery. Even though she is a recent graduate, her work has a sophistication seen done by master ceramicists and certainly one to watch as her aesthetic becomes more refined.
Here she talks with us about why she has such a strong design philosophy behind her work and all the work that goes into her creative process. 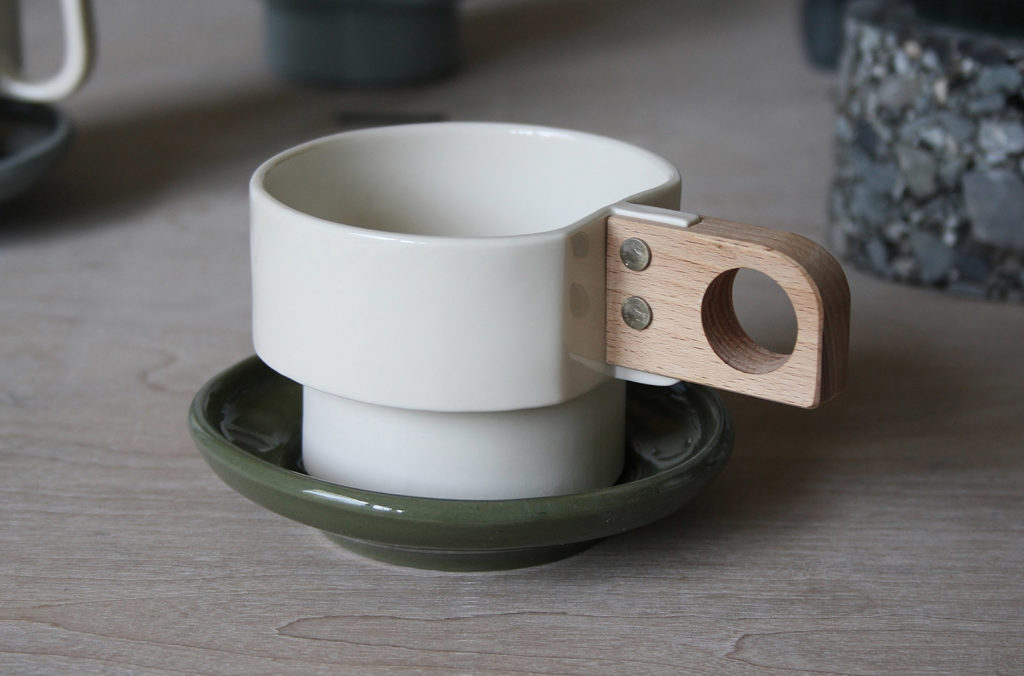 How did you get into ceramics?

I’ve always loved hands-on, creative subjects but had only really worked with clay a couple of times before university. I studied 3D Design & Craft rather than a specialised ceramics degree, so we tried different material areas (wood, metal, polymers/ composites, and ceramics) in our first year. As soon as I learned the mould making and slip casting techniques I was hooked! I can be a bit of a perfectionist and these processes allowed me to create the sharp forms which appeal to me most, with each piece still retaining handcrafted qualities. Wanting to improve and get to grips with a material I’d previously known very little about was what kept me coming back to the ceramics department. After graduating me and three classmates were lucky to get a studio in central Brighton, and this really encouraged me to continue making. 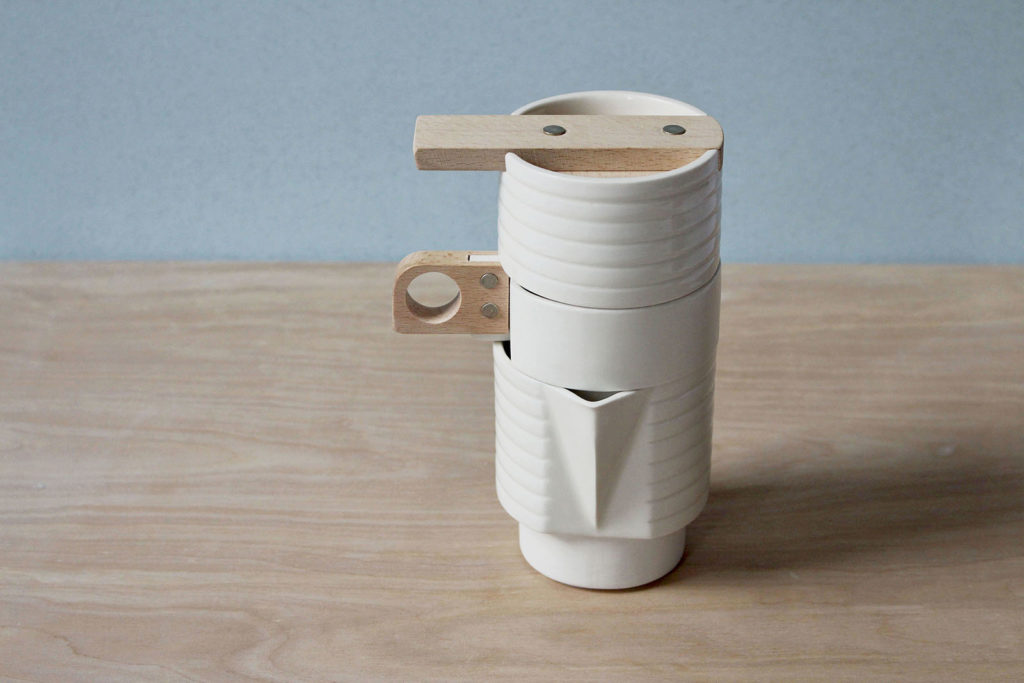 I’m drawn to the precision of architectural forms, and really enjoy the challenge of replicating these in ceramics. Surface decoration isn’t my main interest, so I’m more focused on architectural forms rather than the building facades. That’s partly why I became so interested in Brutalism, for its lack of adornment and strong, sculptural forms. I also look to architecture for interesting ways to combine materials and see my work as being a kind of interchangeable miniature architecture which users can build through stacking. 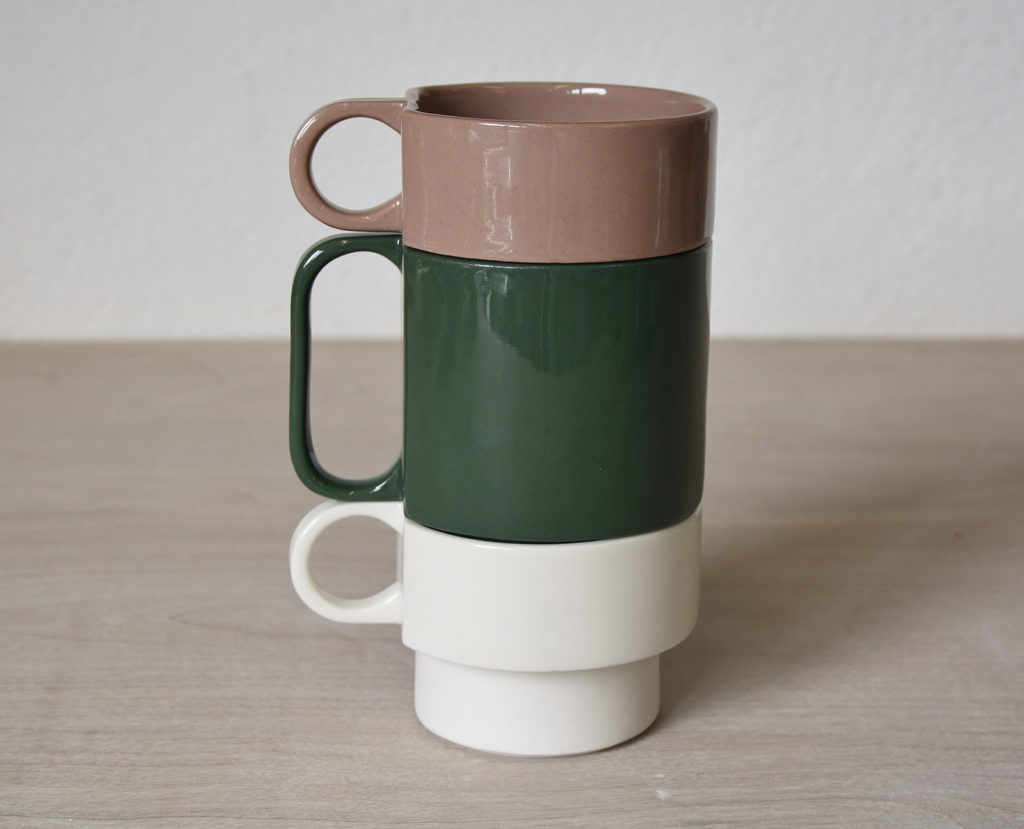 Atro-city is a collection that has incorporated wood, why did you choose to mix the two mediums?

When I started designing the range in my final year of uni, I wanted to stay in the ceramics workshop to simplify future production, but it wasn’t long before I got tempted to go back to the wood department. I felt like I should utilise more of my learned skills to create something a bit unusual. Combining the two mediums is a challenge as each ceramic piece is slightly different, so wooden components need to be individually made, but this care and attention is what makes each piece unique and different from a mass-produced product. 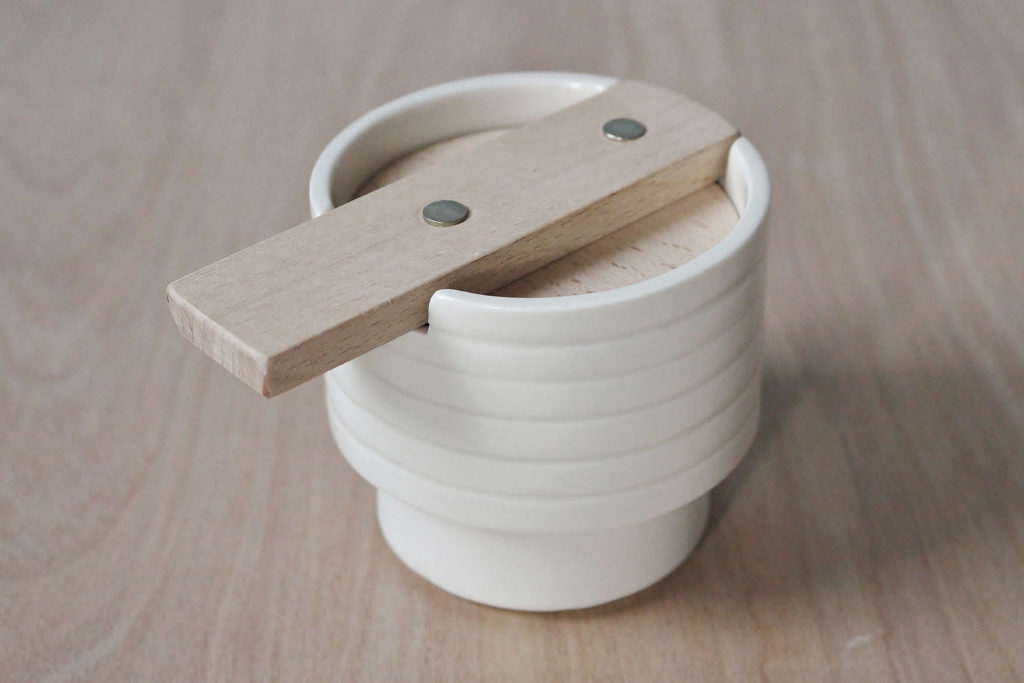 One of the design notions that I was looking at Atro-city was ‘truth to materials’, so I began to consider how different complimentary materials could be brought together in a single piece. I love the simplicity of porcelain and beech and think that these clean materials allow the forms to be the main focus. The porcelain has been stained throughout rather than covered with a coloured glaze, and the rivets used to attach the beech to the porcelain are celebrated rather than hidden away.

I work with slipcasting and mould-making techniques, which are perfect for creating multiples of the precise and angular forms I’m most interested in. I make the initial forms on a plaster lathe to create the defined edges, and hand carve handles and spouts from plaster. I spend a lot of time designing pieces before I get into the studio, first drawing rough sketches before moving onto technical to-scale drawings, collages, and paper models for each design. After I better understand the proportions and scale of a form, it’s easier to predict any problems which might arise during making. I like the outcome to look exactly like the final design, and I would say that my creative process is quite controlled and methodological. 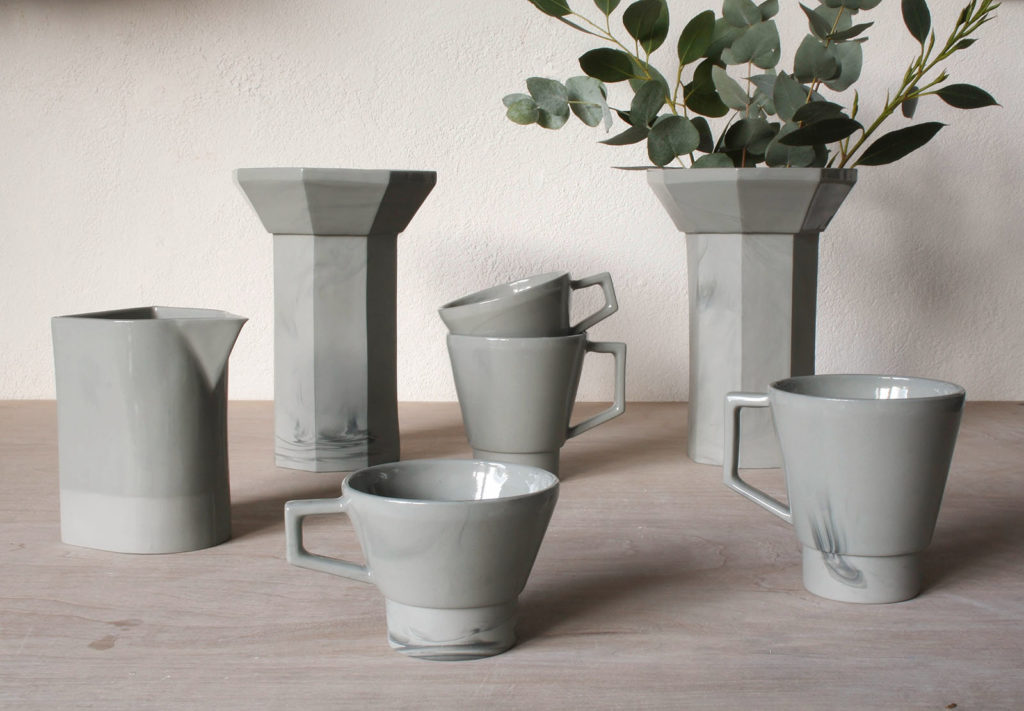 Each of your collections has a strong concept behind the aesthetic, can you tell us what drives this tendency in your work?

Something which really helps my design process is having some limitations and requirements for each piece, almost like a kind of brief. For the Atro-city collection, I researched the design philosophies behind the architecture and incorporated these into the pieces, balancing ideas like ‘form follows function’ and ‘truth to materials’ with typical Brutalist aesthetics. I was interested in the possible reasons for the recent revival of Brutalism, and this led me to name the collection ‘Atro-City’; as a bit of a play on words about how Brutalism is now being seen in a fresh light, far away from previous opinions of it being monstrous, inhuman, and atrocious. Rather than picking colours based on trends I have selected them based on a mid-century colour palette, and hope that this along with the honest use of materials, pared-down designs with a primary focus on form and function and honest use of materials will age well. 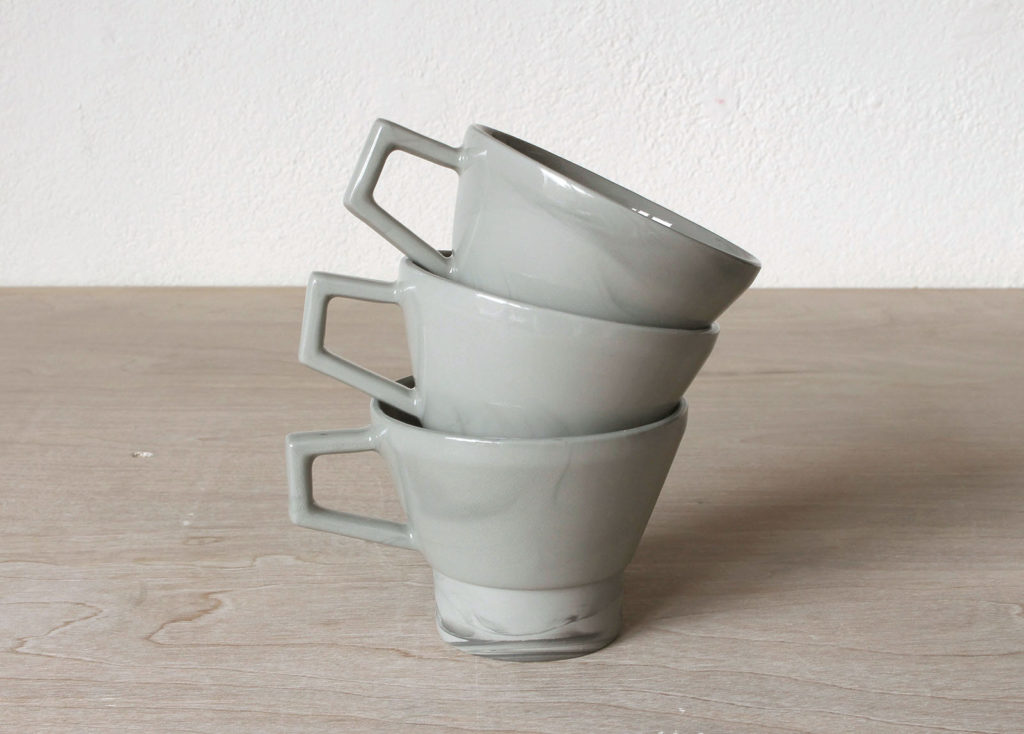 What does a typical day in your studio look like?

I work in small batches, so I usually focus on a couple of different tasks each day. I start by filling moulds for pieces I need for an order/ re-stock and then start doing other jobs like fettling pieces which were made earlier in the week. Often I start doing too many different jobs at once, so it can become difficult to find a moment to stop, but I really love getting in the zone like this. Other days I’ll be plaster mould making or glazing, but because the studio space isn’t huge I try to focus on finishing each task so that there aren’t too many things going on at once. I work freelance for other ceramicists on other days so am often in the studio in the evenings after work as well if things need to be finished. 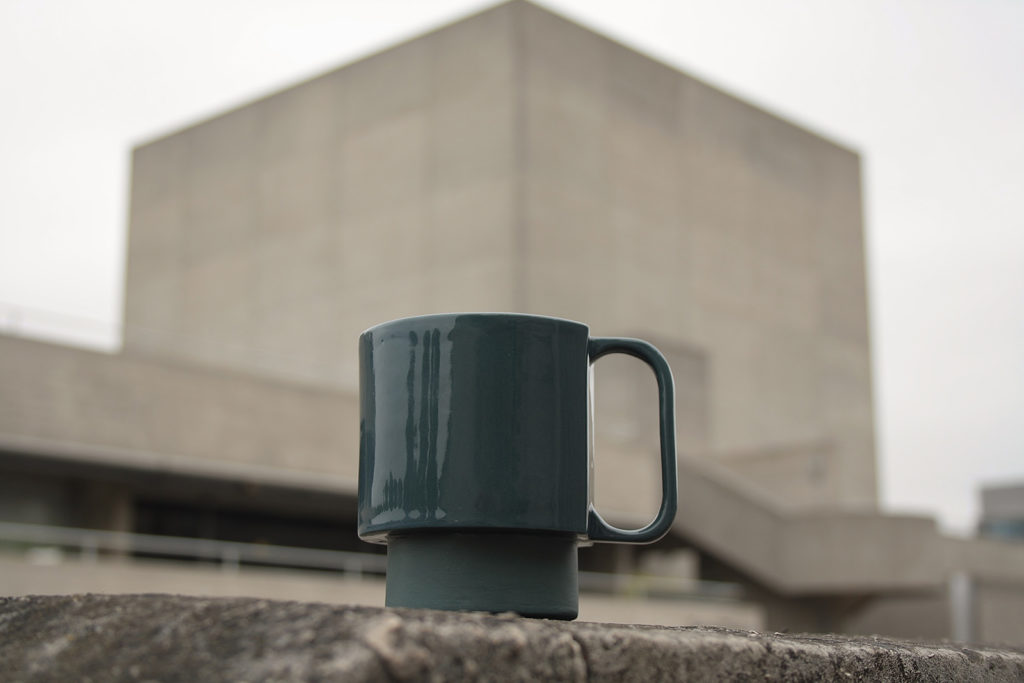 What are you working on now?

Last month I launched a new commissioned range of four homeware items designed for Hayward Gallery, and this project has kept me really busy since October last year. After you graduate you realise how difficult it can be to produce new work without the facilities you’ve had at your fingertips, so I’m glad this opportunity has pushed me to create a new collection. I’ve been really focused on deadlines in the last year, so at the end of this month, I want to take a step back and focus on what I need to prioritise to drive my practice forward. It’s so easy to get caught up in the making side of things.